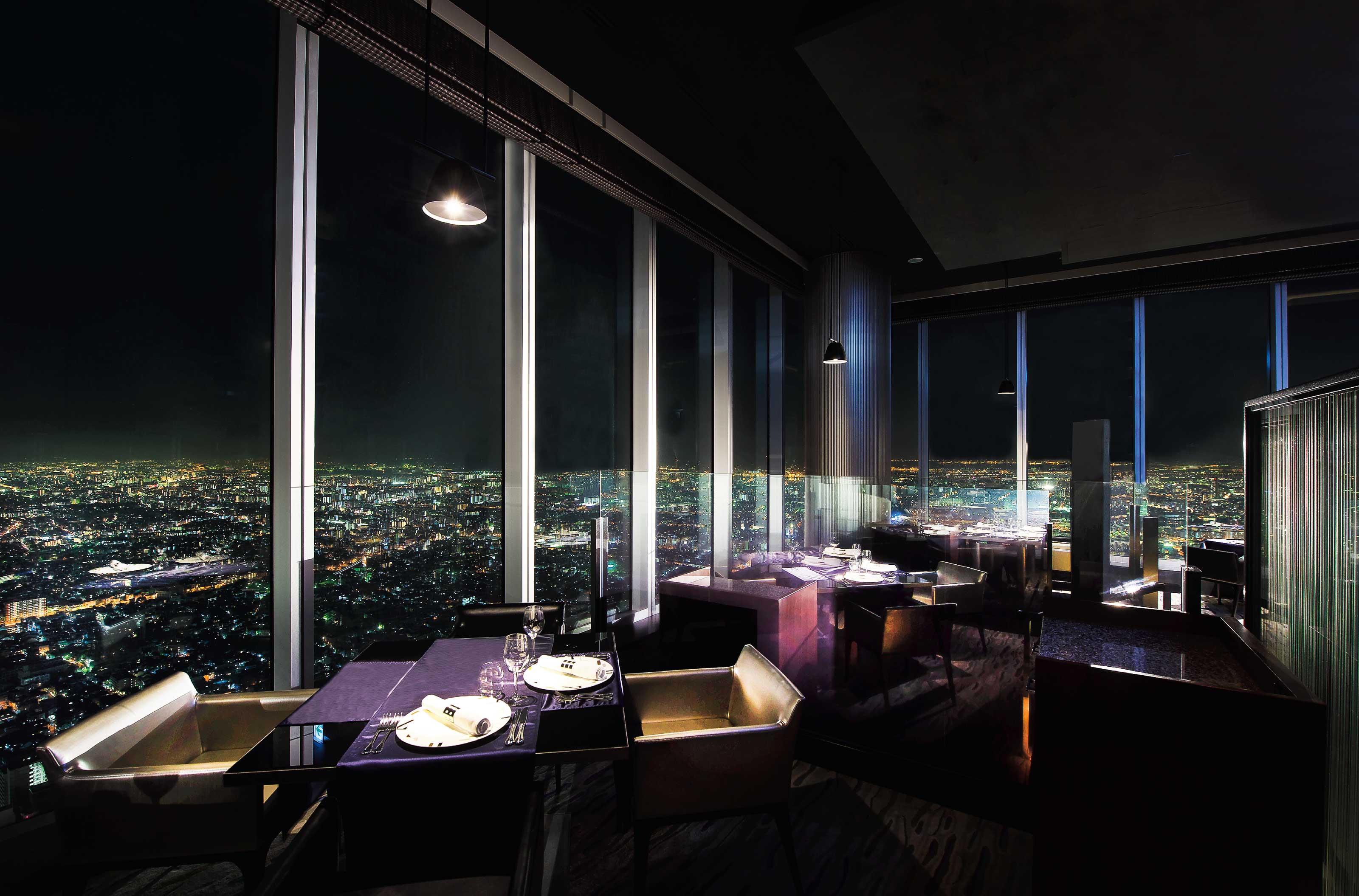 The Abeno Harukas building, which opened in 2014, is Japan’s tallest, stretching 300 meters above its namesake Abeno district. The Osaka Marriott Miyako Hotel’s guestrooms occupy most of the 38th through 55th floors of the building – making even the lowest guestrooms loftier than most penthouses. From the upper levels, the incredible scope of the city becomes clear when weather permits. And at night, when the bustling energy of 19 million people far below is channeled into a glittering delta of lights stretching to the horizon, guests can enjoy the vibrancy and excitement of the city over dinner from a calm oasis.

Fittingly, Kanko Kikaku Sekkeisha, the firm which designed the hotel’s guestrooms, chose »orbits« as an aesthetic motif. Overall, the designers sought to emphasize sui – sophistication, class, and comfort – over iki, or flashy modernity. Without being ostentatious, the guest rooms are elegantly appointed, particularly the bathrooms, which pair cool gray marble with deep, Japanese-style soaking tubs. The Japanese are the ultimate connoisseurs of state-of-the-art washlets, and INAX’s Satis and Regio models are given prime real estate here – in some cases, even floor-to-ceiling views.

There are also abundant references to traditional Japanese design. The floral wallpaper patterns, called Ise-Katagami, are drawn from kimono fabric prints. Other touches are even subtler – for example, outer guest-room doors never open directly onto the suite; instead, visitors weave around a partition before reaching the living area, preserving a characteristic »in-between« space that enhances the feeling of depth. 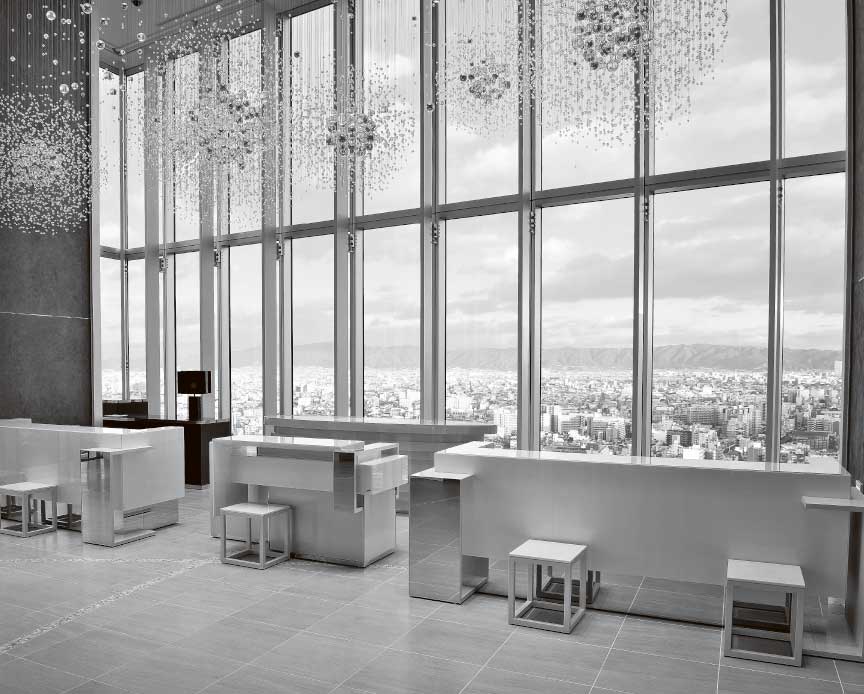 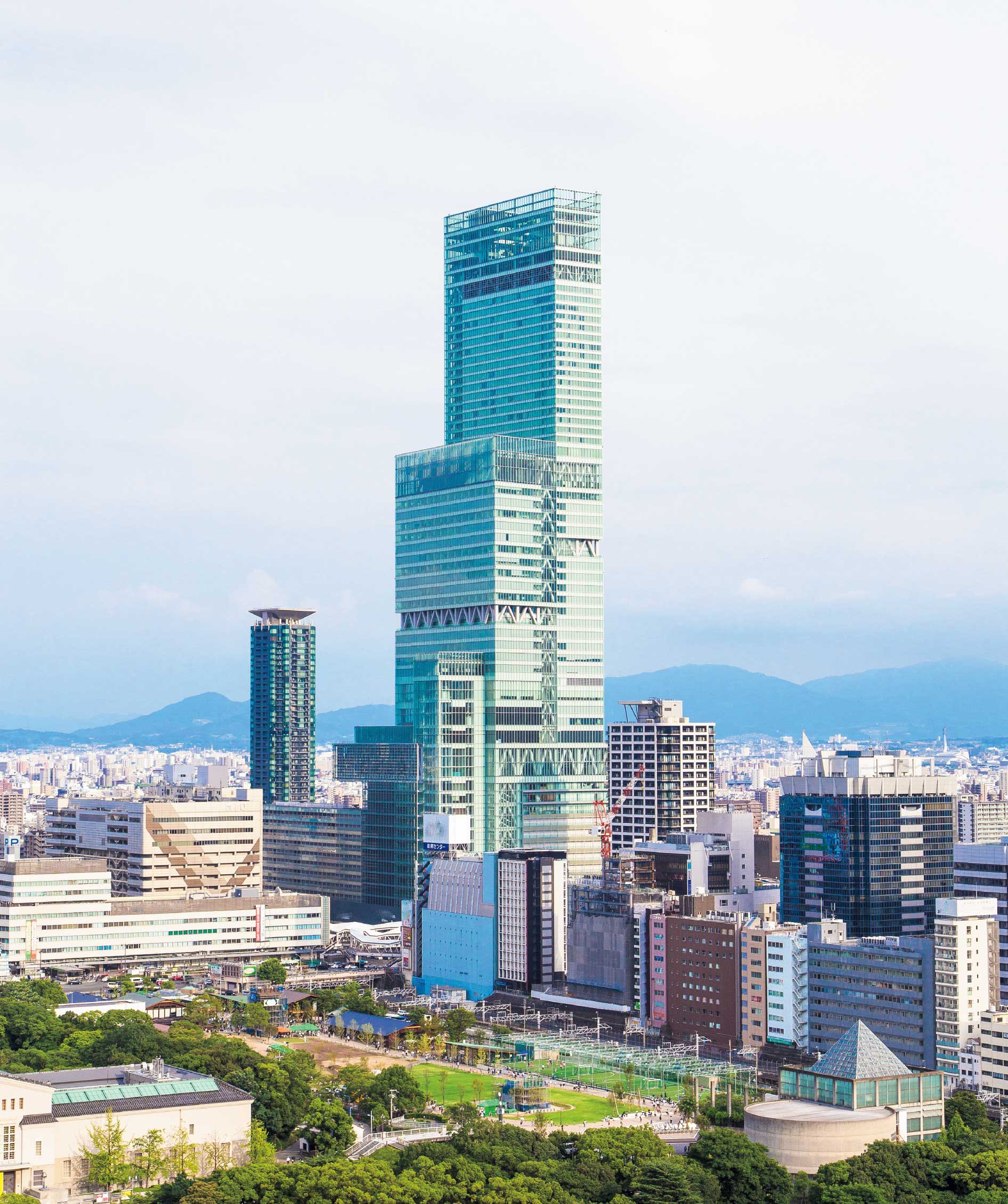 The Osaka Marriott Miyako Hotel is situated in the top twenty floors of the Abeno Harukas building, the tallest skyscraper in Osaka.

»INAX Shower Toilets are very modern in their design. They work really well in a lot of places.«

So, I’ve heard there’s a »secret« floor of the Osaka Marriott that isn’t like the rest.

I did almost all the guest rooms, but my personal assignment was the 38th floor, which houses the Comfort Rooms. It’s completely different from the other floors. Only people »in the know« know about it.

What makes the 38th floor unique?

Something very architectural: originally, this floor was not built for guest rooms. The ceiling was the highest in the building, and the floor was soundproofed. It was very luxurious.

Why are the desk and chairs there so much lower?

That’s because the floor has a hollow space where you can sit and put your feet down. In the suites, every section has a different floor height. For example, there is a sofa next to a stair and you go down to a living area, and so on. So it is not really a barrier-free room, but you can stand at different points in the room and enjoy the view.

Are the bathrooms different, too?

Oh, we made some wild choices in the bathroom. We placed a bathtub in the corner of two glass walls, where anybody could see it, or set the toilet in a very bold spot, with an important view. It was playful, but it came out well.

How did the INAX shower toilets fit in?

The design is quite modern compared to other companies. It works really well in a lot of places. And when we came near the toilet, its lid opened automatically and music started playing. Maybe it was making it clear, telling us, »Hello, here, this is the place.«

What did the Osaka Marriott Miyako Hotel think of the 38th floor?
The 38th floor has become very popular. The hotel told us that many guests come specifically to stay on that floor – and there are only eight rooms. 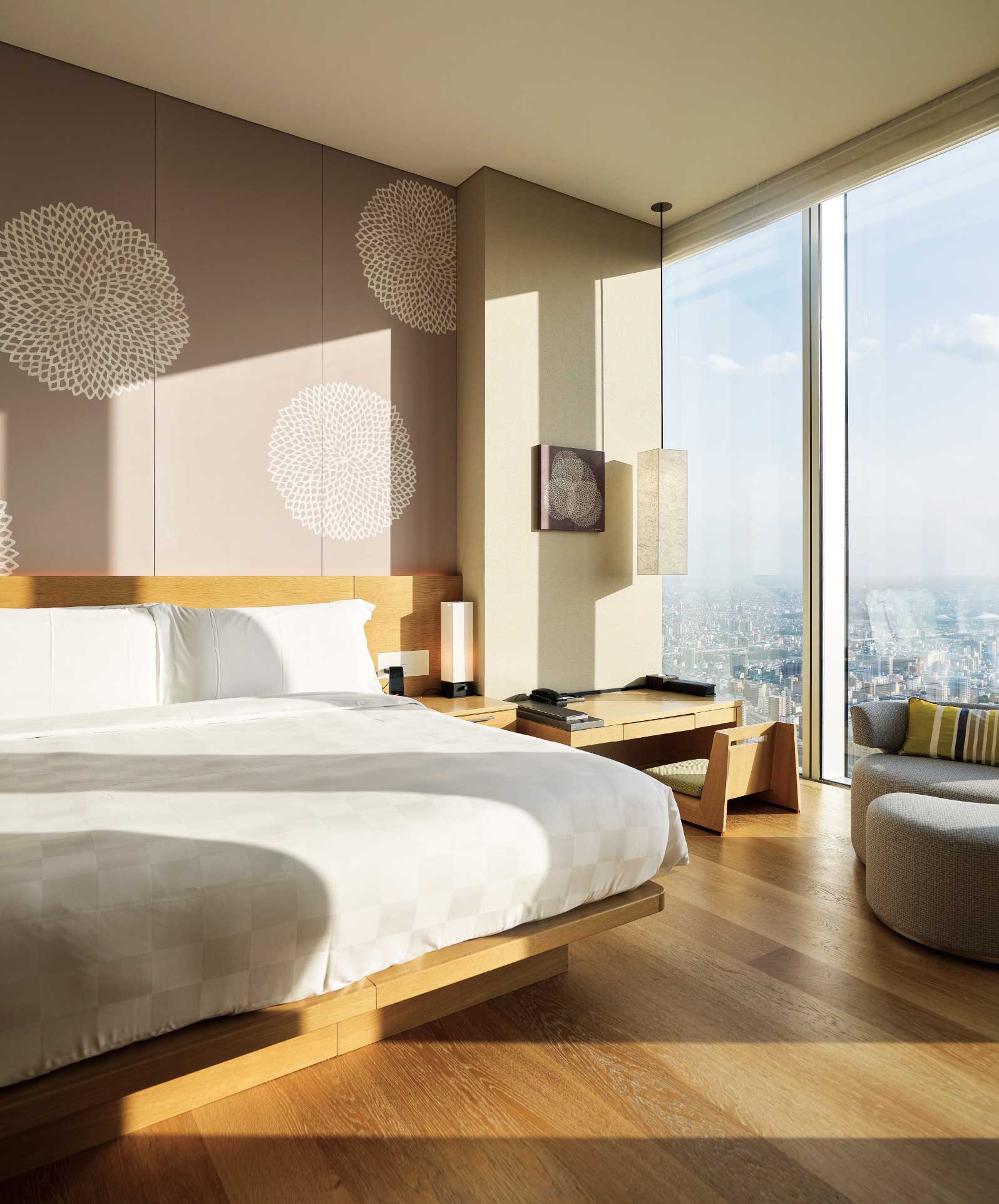 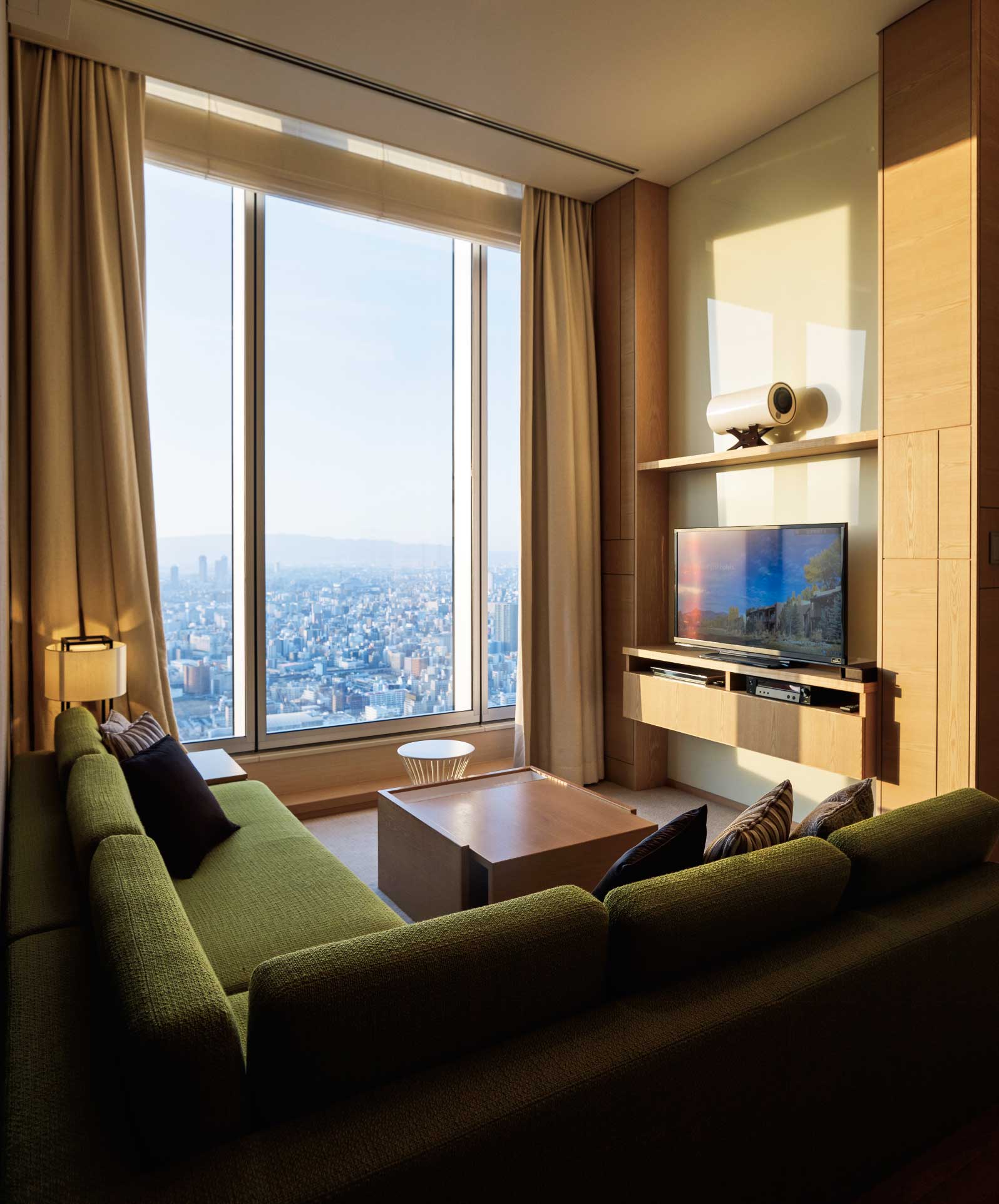 In Japan’s tallest building, far above the bustle of the city with its 19 million inhabitants, the Osaka Marriott Miyako Hotel has many different types of rooms. Even the lowest floors are higher than most penthouse suites elsewhere. 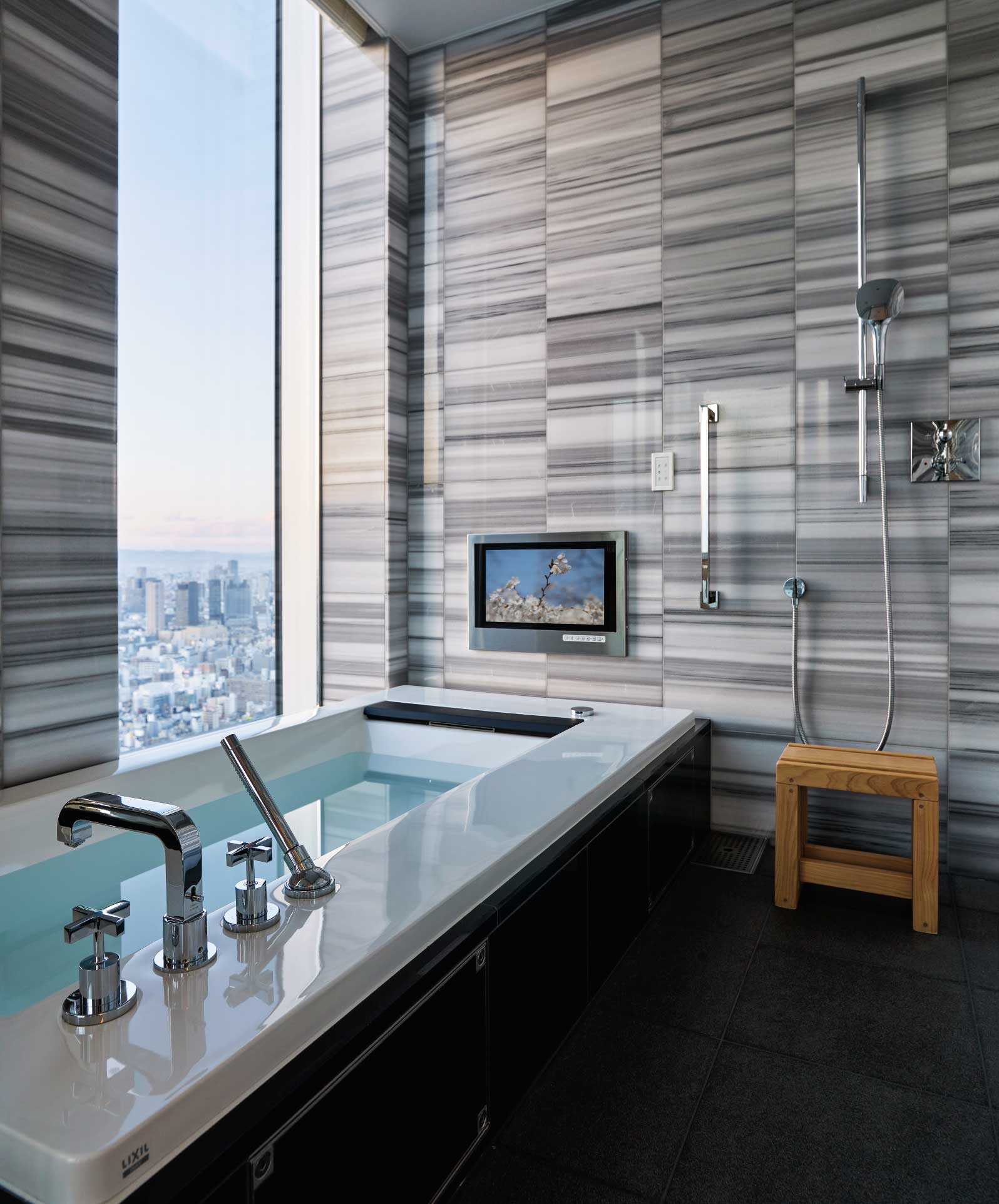 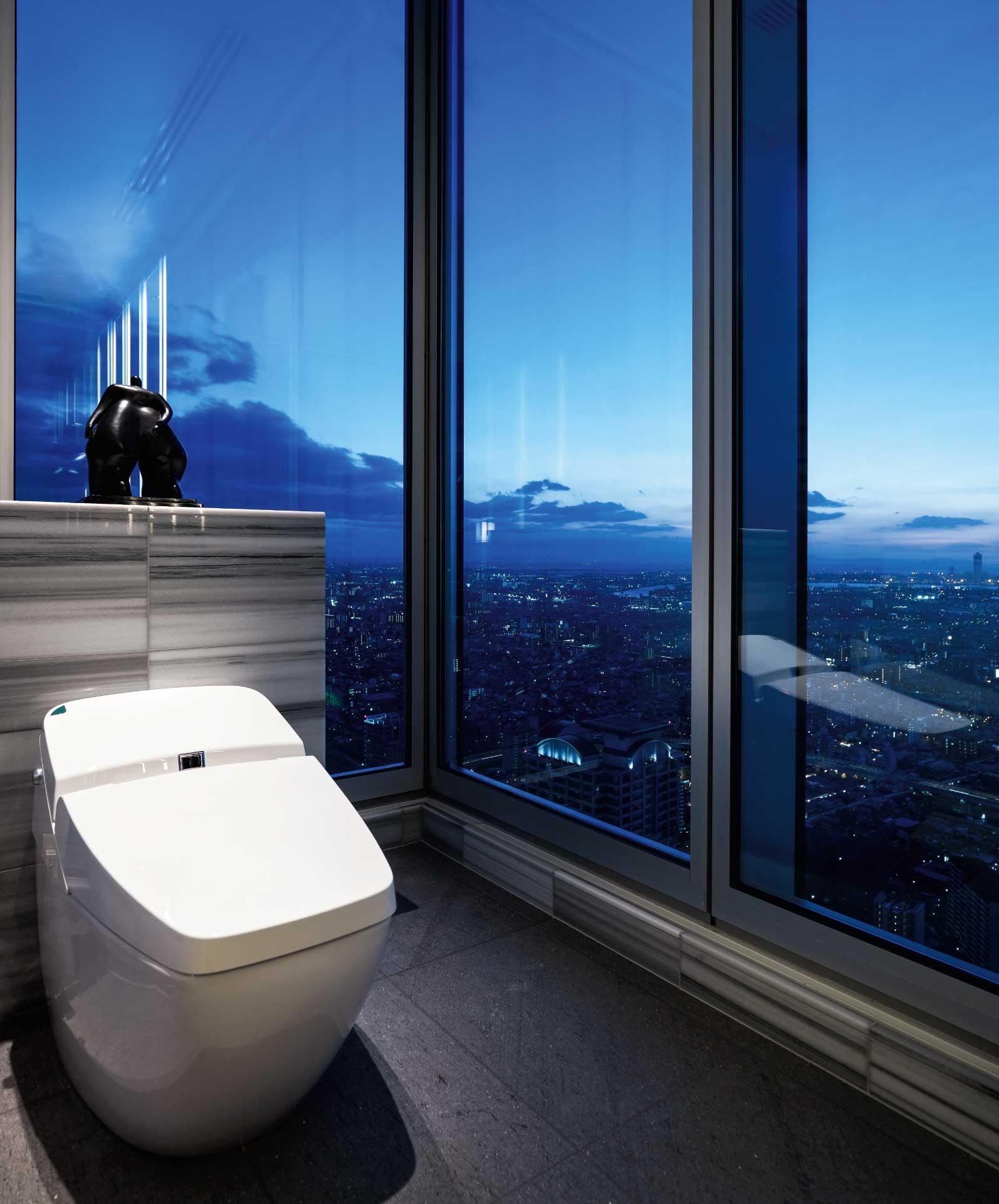 Some of its rooms, such as the one pictured here on the »secret« 38th floor, are designed in a typical ryokan style, where furniture sits low and the floor is partially raised. In the bathroom, the INAX toilet sits, more unconventionally, in between two glass walls, as if floating on a cloud orbiting the city skyline.